A PALACE IN THE HEART OF GRAN VÍA

In 1918, the architects and brothers Joaquín & Luis Sainz de los Terreros Gómez won the public tender organized by the Unión Mercantil Industrial for building its new headquarters in Gran Vía. Their Project consisted of a multifunctional building, in line with the architectural compositions of the age, where the society’s activities could take place. At the same time, some areas of the building were dedicated to rental flats and stores.

The Círculo’s rooms were distributed among the basement (with a fencing room and gym), the ground floor (living rooms, reading rooms and dining hall), the main floor (great hall, offices and suites) and the terrace (dining halls and summer refreshment areas).

Coomercial stands and stores were located in the façade of the ground floor, while rental apartments were located from the second floor up. The tenants had an exclusive entrance from Hortaleza St., a very different one from the one designed for accessing the Círculo from Gran Vía Avenue, consisting of a Romanesque arch of considerable size and a huge lobby with columns, similar to many entrances to some 18th century palaces.

The new headquarters of the Círculo de la Unión Mercantil e Industrial of Madrid was inaugurated on April 24, 1924 at a recently built Gran Vía.

The new building stood at a very prestigious spot. This used to be the enclave of the Palace of Count Santa Coloma, famous in all Madrid for the nice aromas distilled in his kitchens. Also the Nueva Iberia café, found in the old corner of Hortaleza with Reina St., which was known to be the meeting point for the renowned “Bilis Club”, a “literary society without by-laws, board of directors or address” in which famous cultured people of the times took part, such as Leopoldo Alas Clarín, Marcos Zapata, Armando Palacio Valdés or José Ortega Munilla.

The first three floors are linked by a grand imperial staircase made of marble, organized around a wide rectangular atrium topped by an amazing stained-glass ceiling made by the famous French manufacturer Maumejean.

In the upper floor, the cresting consists of a succession of Romanesque arches, recalling the Monterrey Palace in Salamanca. A careful Stone decoration was used for the façade, with Neo-Renaissance and Spanish Plateresque motifs.

We should also pay attention to the astonishing tower crowning the building, with a pointed dome covered in black slate which highlights the meeting point between Gran Vía and Hortaleza.

Until recently, the building hosted the facilities of the Economy, Employment and Citizens’ Participation Department of the Madrid Council. On April 5, 2010, the old ballroom hosted the reception of the Spanish King and Queen which completed the celebration of the centennial of the Madrid Gran Vía. 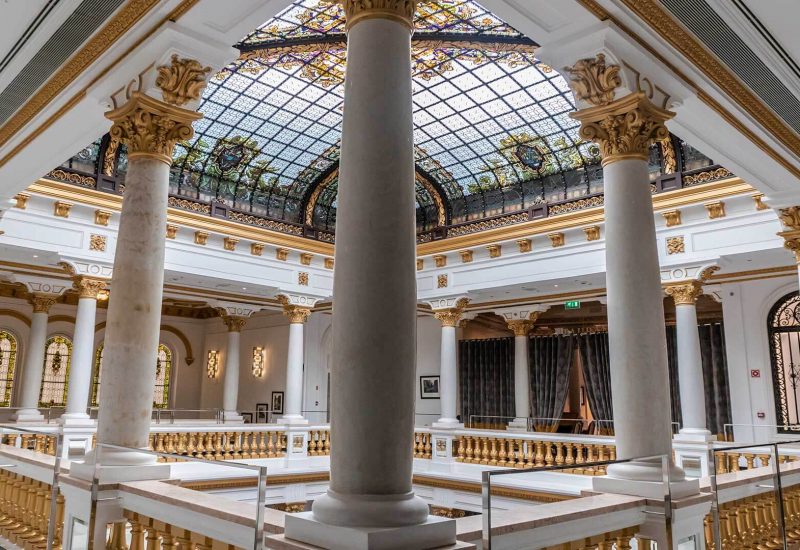 Core of the building, with entrance from the lobby; it’s neo f the most charcateristic spaces in the palace. 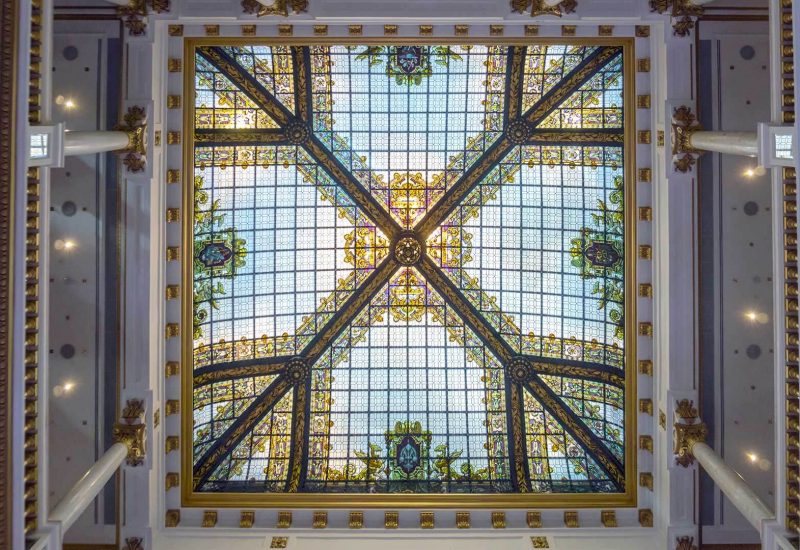 This amazing hand-painted stained glass, so colorful and majestic, allows rejoicing in an ideal atmosphere. 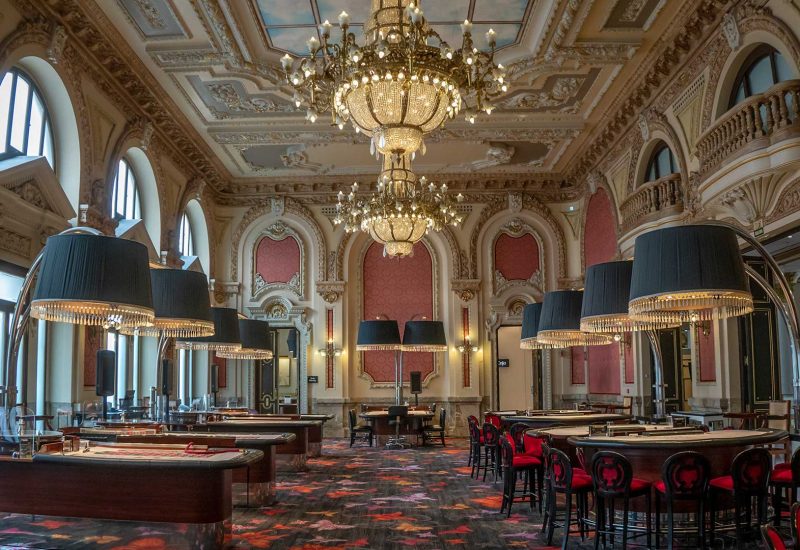 A picture from a fairy tale, this spectacular ballroom with 260m2 is one of the most beautiful spaces in the Casino. 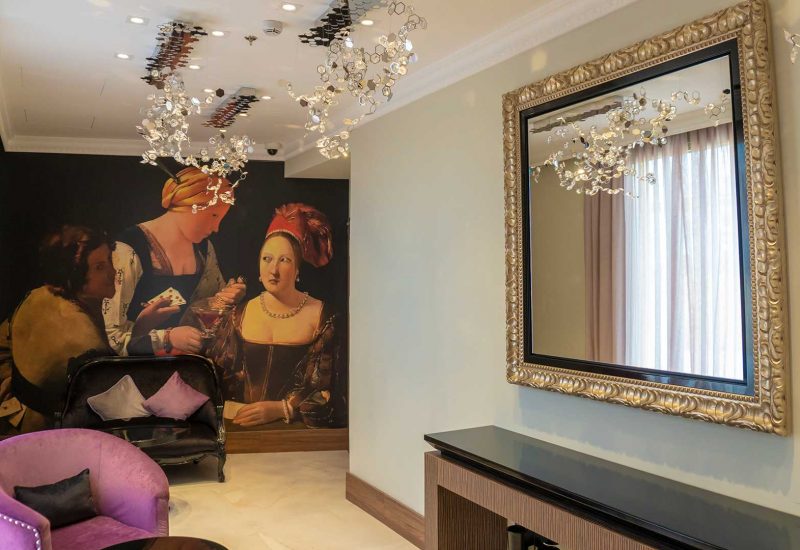 In the upper floor, Casino Gran Vía hides a discreet space, at our clients’ level, reserved for private events and games. 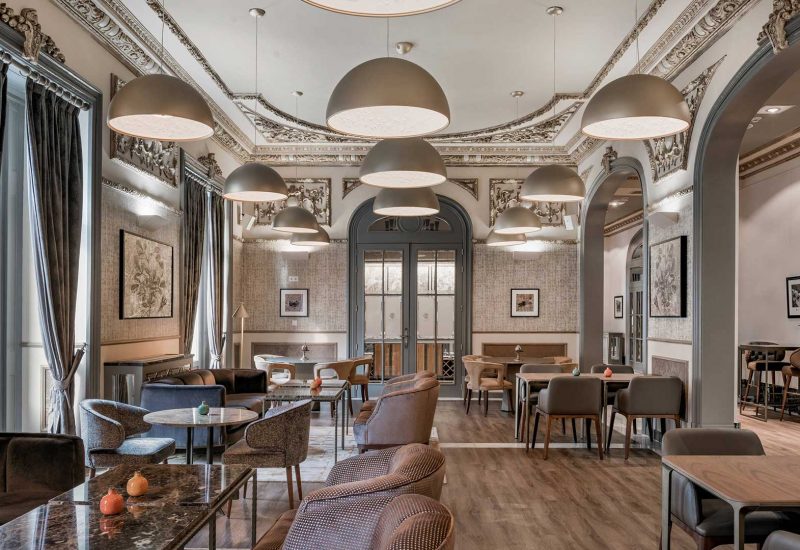 Beyond games, in Casino Gran Vía you’ll discover a variety of gastro spaces (restaurant, cocktail bar...) and an exclusive hotel. 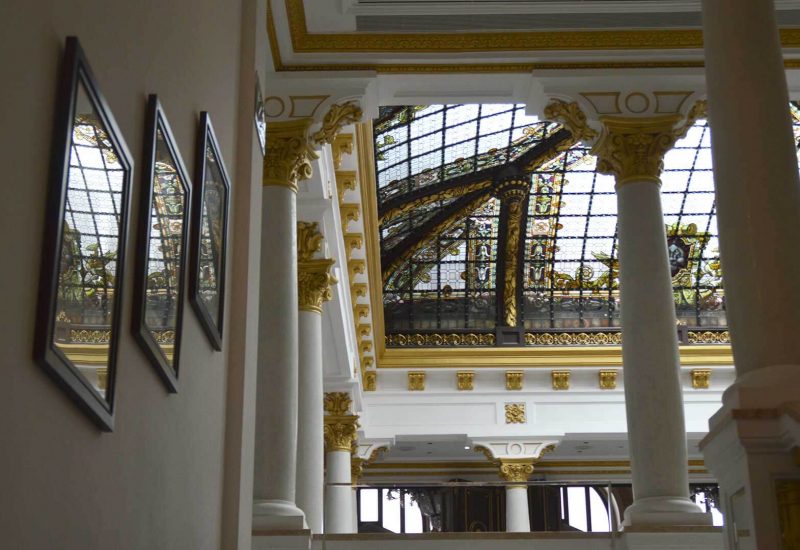 The exhibition "Memories of Gran Vía" is distributed among 15 Casino rooms, each of them with a different topic.

Casino Gran Vía is located at a splendid palace in the heart of Madrid, comprising a variety of unique spaces full of history, beauty and comfort, all with a single purpose: your enjoyment of unique experiences.